The number of Brits aged 50 or older has increased by 45% since 1970 and will continue to grow1. As we change and the world changes around us, so too do the sources of stress and joy in our life. More people than ever are facing later life and the unique stresses and joys it can bring.

We surveyed over 1,000 over-50s to learn their greatest sources of stress and joy. Our results reveal some top tips for over-50s to consider when striving to improve their quality of life. 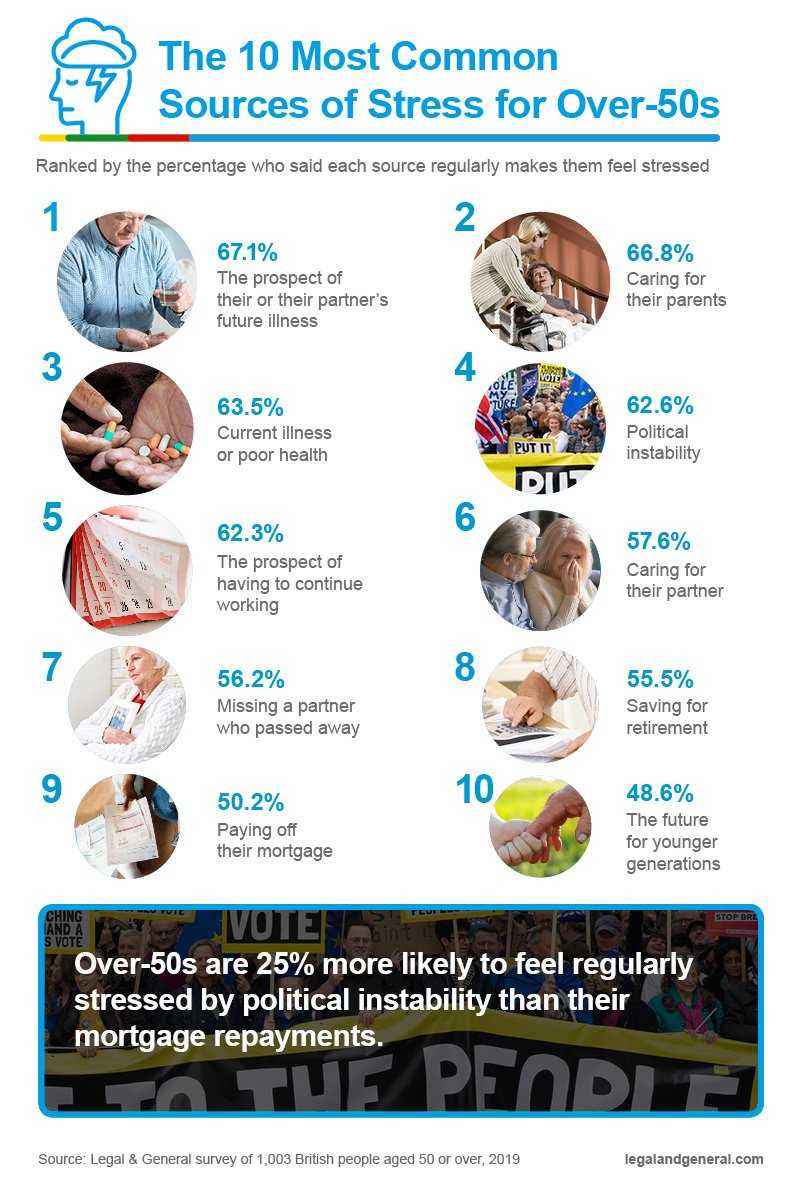 We showed people a list of potential sources of stress and then asked which they currently experienced and regularly felt stressed by.

The second most common source of stress was being a carer for parents. Two-thirds (66.8%) who cared for their parents said they find it stressful. One in 5 people aged 50 to 64 care for an older family member2, equivalent to 2.5 million people – our results therefore suggest 1.7 million Brits are stressed by the responsibility of caring for elderly family.

'I wish I had more freedom to do things without caring responsibilities precluding them.' 56-year-old woman

We’ve seen that the three most common sources of stress in later life revolve around coping with ill health – be it one’s own or a loved one’s – or fretting about the prospect of it. The next most common source of stress was quite different: politics.

We also asked over-50s what single thing they’d change about their lives to reduce their stress the most. One in 10 said they would cure their ill health and an equal proportion said they’d want to see a resolution to political instability.

We live in turbulent times, and our findings suggest that the uncertain future created by political upheaval is taking its toll on over-50s’ daily peace of mind.

If there was one change you could make in your life to reduce stress, what would it be?

‘Stop following politics and hand in my political membership card.’ 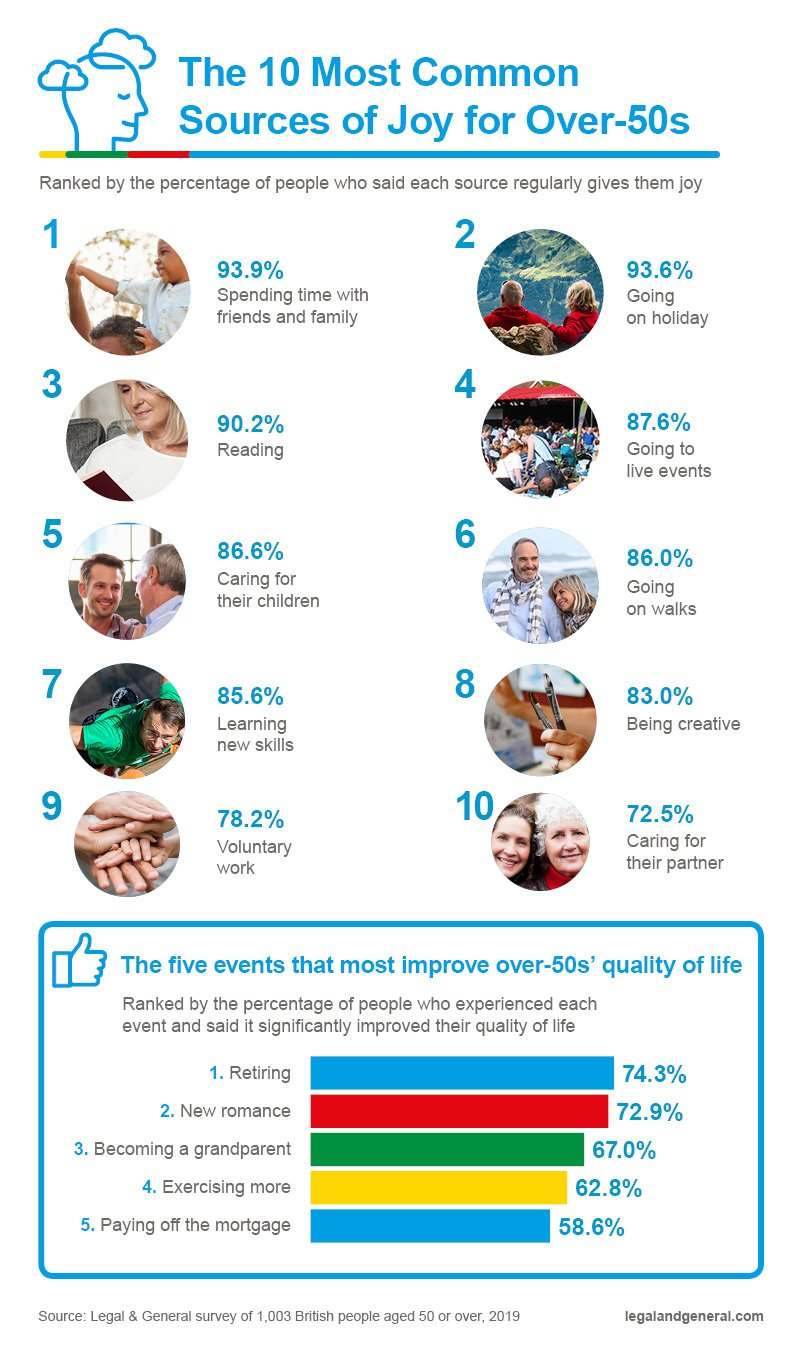 Numerous studies have shown that families of all ages are lacking quality time together3,4,5, and yet our results show that more people aged 50+ said it regularly brings them joy than anything else. It seems we should cherish and defend time with friends and family, which we’re increasingly distracted from by work and gadgets.

But the milestone that most people said significantly improved their quality of life was retiring from work – 74.3% of over-50s said as much, rising to 82.2% among those who managed to retire early (before their state pension age). It’s no wonder, really, because the time they spent working is now free to spend on things they get more joy from … at least, that’s the hope:

‘My job as a finance manager was very stressful. Within weeks of retiring I had lost excess weight and my work-related stress was gone.’

‘I’m retired but give 40 hours or more to voluntary work. It brings me a lot of joy, but it’s also stressful because I want more time for my friends and family.’

Reaching life milestones sometimes makes people reevaluate what they want or seek out new adventures. One in 12 (8%) over-50s we spoke to said they’ve found new love since turning 50, and 72.9% of them said it significantly improved their quality of life.

Our role in the family changes as we age. Most of the time, responsibilities to our children ease off, we spend more relaxed time with grandchildren and the serious responsibilities begin to fall on caring for our parents instead. Caring for loved ones is a labour of love, but the hope as we age is that emphasis is on the word love, not labour.

According to the over-50s we spoke to, caring for grandchildren was emphatically a joyful responsibility to take on (although 26% said it brings some stress too). The prospect of caring for adult children is more ambiguous: 48% said they find it purely joyful, 12% said it only brings stress, and 37% said it causes mixed feelings of stress and joy.

When people care for their elderly parents, 57% describe the experience as only stressful. Almost 1 in 4 said caring for their parents is both a stressful and joyful experience, while the remaining 17% said it’s a joy to give back.

All families are different, and the level of care required influences the carer’s experience. But in general it seems that continued responsibilities, which prevent us from prioritising ourselves after kids leave the nest, are a significant cause of stress in later life. So what can over-50s do for themselves to reduce stress and bring joy to their life? 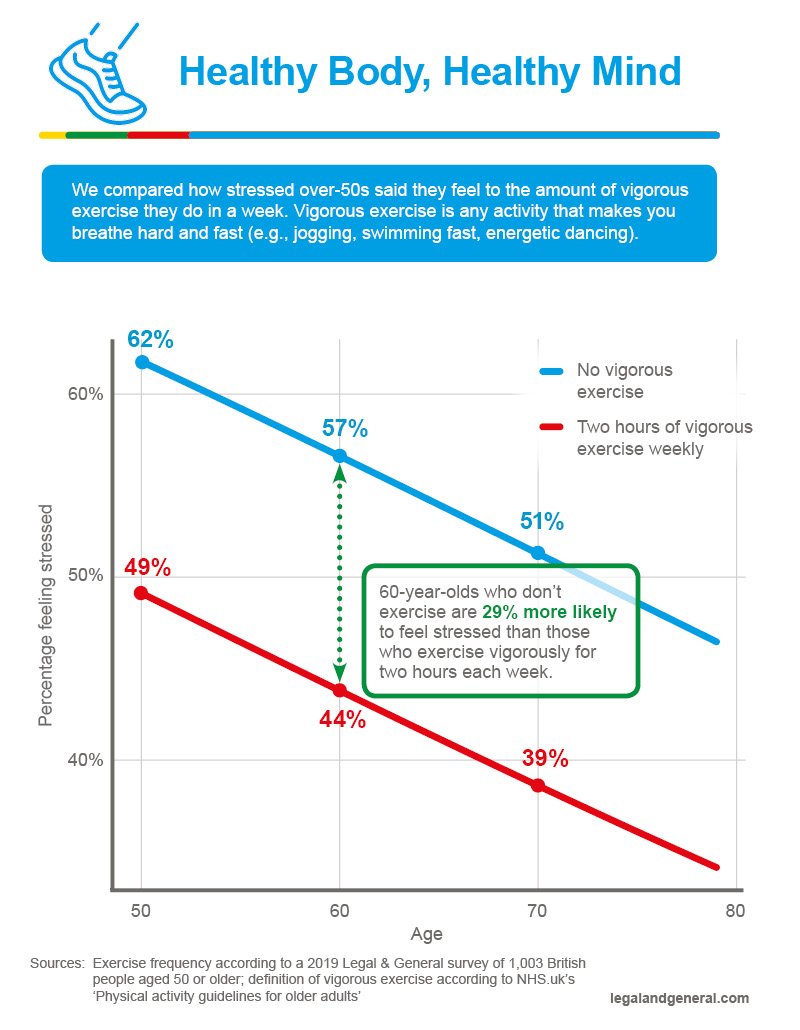 Exercise is one stress-reducing activity people of any age can do for themselves. To stay healthy, the NHS recommends 150 minutes per week of moderate exercise or 75 minutes per week of vigorous exercise6. Our results show that, across all ages in later life, people who said they regularly exercise were also less likely to feel stressed.

According to our results, we’re less likely to feel stressed as we get older, presumably in large part due to retirement. But, among people who do no exercise, it’s only until the age of 73 when the majority say they don’t feel stressed, long after the retirement age. Whereas, at any age, the majority of people who do two hours of vigorous exercise said they don’t feel stressed. Across all age groups, exercising for two hours a week reduced people’s chance of feeling stressed by at least 20%.

If you regularly exercise at 50, it’s likely that other life circumstances also lead to feeling less stressed. The fact that you’re healthy enough to exercise is one example. But the association between exercise and de-stressing persists even after accounting for someone’s age, retirement status and whether they have a long-term illness. It makes sense – the link between exercise and mental well-being is well-established7. 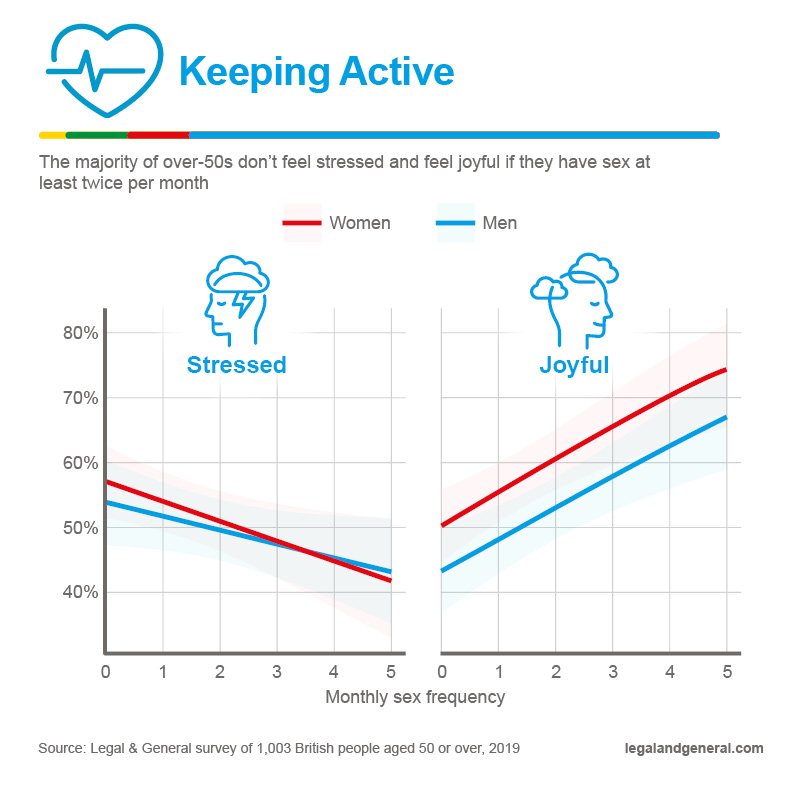 Another way to keep active in your 50s and beyond is to maintain a regular sex life. A comprehensive recent study revealed that one-third of over-50s are sexually active twice a month or more8,9. The level of intimacy people need often changes with age, but the fact is a substantial number of people say they regularly enjoy being intimate, long into their 70s.

Our analysis closely matches previous findings in that roughly one-third of women and almost half of men said they make love twice a month. Our results build on previous research to suggest that the one-third of over-50s who regularly enjoy intimacy are less stressed and more joyful. With each additional instance of sex per month, men and women were approximately 5% less likely to say they feel stressed and 10% more likely to say they have enough joy in life.

As with exercise, the association between sex frequency and feelings of stress or joy interplays with other factors that affect how stressful and joyful someone is likely to feel. Nevertheless, the effects of intimacy on stress and happiness are often talked about, and our study puts numbers to the discussion among people aged 50 or older.

Being intimate at least twice per month is the threshold at which the majority of men and women over 50 feel happy with the balance of stress and joy in their life. We’re all different, but perhaps twice a month is a number each of us should consider when deciding what we want.

Of all the sources of stress for over-50s, the reality or prospect of ill health dominated. The next most common source of stress to arrive in later life was the responsibility of caring for parents. Caring for loved ones is a bittersweet experience and, if possible, it’s best to only commit to what you find manageable so that you can enjoy spending quality time with them too.

Political instability is something that affects everyone, but the over-50s we spoke to clearly showed this is an issue they feel keenly, choosing it more often than paying off their mortgage as a source of regular stress they would most like to disappear.

Quality time with loved ones, holidays, keeping active, retiring (especially retiring early) and becoming a grandparent are among the things that regularly bring us joy in our 50s and beyond.

We’re advised to keep active for as long as we can in later life to keep ailments at bay, and our findings show that, if you’re able, two hours of exercise per week and staying intimate with your partner can significantly boost your chances of feeling joyful and stress-free for years to come. At the end of the day, improving your quality of life needs self-care in whatever form it comes.

‘I need to do more for myself to bring more joy and happiness.’

Feel free to share our findings and images for non-commercial purposes. But please do link back to this page so that readers can access the full findings and credit is given to Legal & General’s research team.

The Legal & General research team surveyed 1,003 British people aged 50 to 87 in October 2019. Among our survey participants, 48% were male and 52% were female. We recruited participants using an independent academic research platform with which we could stratify participants by age to ensure our sample’s age structure was nationally representative. The maximum sampling error concerning full-sample estimates is 3%.