You might expect an ex-science teacher to be interested in a cutting-edge science centre. But whether most would be prepared to risk polar bears and frostbite to visit it, is another matter.

“We were the oldest people there, but we got on all right!” says Elizabeth, whose visit to Svalbard with her husband is just one of her many adventures since retiring. “We thought it would be nice to go snowmobiling – but we did fall off…”

Nothing fazes Elizabeth. Key to her travels is not only an adventurous spirit, but also a curiosity about different places and people.

“What’s very, very interesting is meeting people of all different cultures,” says this mother of three, whose life since retiring has encompassed the extremes of experience, from volunteering at a hospice to being diagnosed with cancer – both of which only encouraged her desire to see more of the world.

“You don’t know what kind of health you’re going to experience,” she says, recalling the advice of a friend, who said it was important to do things while you’re still able.

Elizabeth and our Podcast host, Angellica Bell, sit down to discuss traveling in retirement. 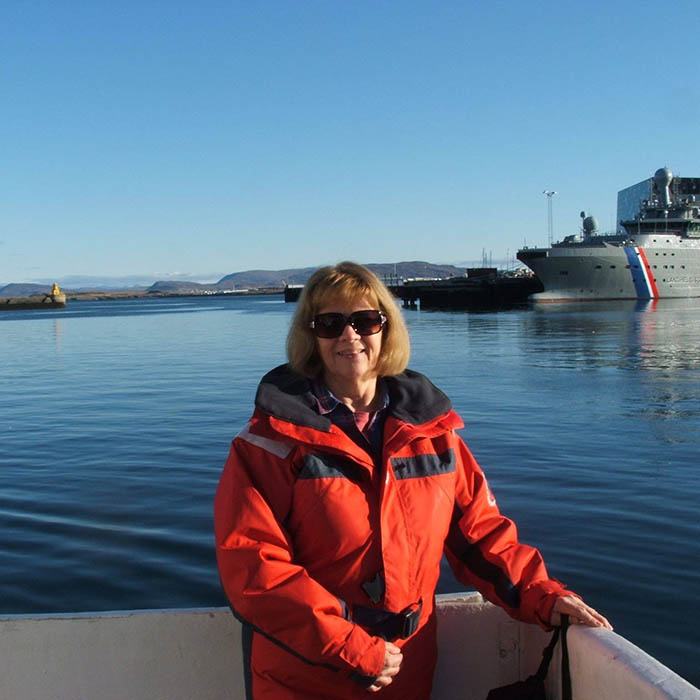 “But being diagnosed with cancer only made me want to do more. Some people might think – I better not go there in case I’m ill. But it hasn’t really stopped me, although it was a big shock.”

Travel and adventure have always been part of her life. In her younger days she went scuba diving (she still enjoys snorkelling), and in the early 1980s visited Romania with her family, when tourists were still a novelty. It was an eye-opening experience; she was saddened to see the local people queuing for food, while the cafes served tourists.

The financial pressures of raising a family got in the way of her travel dreams, but as she approached 50 she began to plan in earnest, aware that she didn’t want to continue teaching for another 20 years.

“I think if you don’t do anything else, it’s a really good idea to pay off your mortgage,” she says. “It’s a substantial amount of money going out every month. We had a shortfall on an endowment mortgage, but moved to a repayment and paid it off about six months before we retired.”

Doing so freed up cash for other things. But when she and her husband wanted to book a last-minute getaway just before they retired, the only option was a cruise. “That’s for old people, oh no, we can’t do that!” was her initial response, but despite her misgivings she soon found out that people of all ages go on cruises.

Starting in the Mediterranean, they toured seven countries and quickly made friends on board. They loved it so much they booked another, and have since been on an American cruise to the Caribbean.

But interestingly it was colder climes that attracted her – they’ve enjoyed cruises in Norway, been dog sledding in the Arctic and braved -30ºC blizzards to spot polar bears.

“We’re just ordinary people – not sports addicts or anything. A lot of retired people could certainly do something like us,” she says.

Brushing up on her language skills

When not travelling, Elizabeth has reconnected with her love of languages; she first began learning Russian at school 50 years ago, and has since picked it up again in retirement by enrolling on a course with the University of the Third Age.

“It’s quite an unusual language, so when I retired I thought I would quite like to brush up on my Russian, learning with other people my age.”

But she’s also managed to travel as part of her charity work – her son runs a research charity, Ataxia UK, and also suffers from this neurodegenerative disease; she and her husband accompanied him to help at a speaking engagement in Vegas, and filled their spare time visiting the Grand Canyon and the Hoover Dam.

In Vegas she even explored the casinos, though she says that they were a “bit busy and not my thing”.

Although Elizabeth claims to be just an ordinary person, she has an extraordinary curiosity to see and hear more about different cultures. Surely by now she must have ticked off most of her travel bucket list?

“I haven’t seen the Northern Lights yet,” she says.